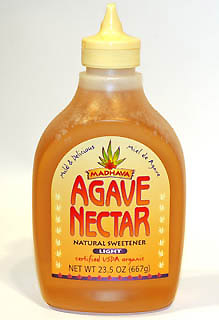 The first time I made coffee in front of my boyfriend, he was horrified. “How many of those blue packets did you put in there?” he asked, squinting. Three.

I grew up an Equal girl and stayed loyal until Splenda was launched. I bought Splenda because it somehow seemed more “natural.” (Obviously, I am a marketer’s dream.)

I started doing research for more natural sugars. Calories be damned, I was ready to ditch my weird, floating artificial sugars and eat something that came from a place closer to the Earth. Right out of the gate I found this article from the Boulder Daily Camera’s Cindy Sutter (disclosure: she used to be my editor) about which sweeteners are the most environmentally friendly.

As she discovered, honey, syrup, and agave nectar are some of the greenest options. To keep my carbon footprint low, I looked for local companies that produce these sweeteners.

Honey: Beeyond the Hive (Fort Collins). Not only does Beeyond have a more traditional clover-alfalfa honey for just $5, they have varietals like orange blossom and raspberry (both of which are seasonal). Bonus: They also use the honey to make beauty products like lotions and soaps.

Agave Nectar: Madhava (Lyons). Sutter makes an excellent point in her article: Agave nectars are only required to be 55 percent agave, meaning if you don’t check the label you may be buying something that is nearly half corn syrup. Luckily, Madhava’s agave nectar is 100 percent agave and organic. And yes, it’s the same plant that’s used to manufacture tequila.

Sugar substitute: Emerald Forest Sugar (Broomfield). Emerald Forest offers xylitol and erythritol—the more popular of which is xylitol, now sold in most Safeway stores. Often branded as a more natural sweetener, it does have a larger carbon footprint. It was traditionally extracted from birch trees, until deforestation worries made Emerald Forest switch to using corncobs in China. The xylitol is then extracted and shipped to Broomfield.