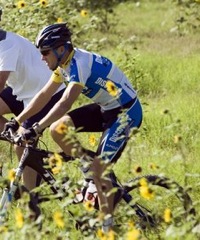 Already one of the most accomplished cyclists in the world, Lance Armstrong set his sights on avenging his 2008 defeat to Gunnison’s Dave Wiens in the Leadville Trail 100 mountain bike race this weekend.

Armstrong came out on top, finishing the 100-mile race in record time, reports The Denver Post (Post video here). His time would have been faster, but he blew a tire and had to finish the race on a slow-leaking back tire. Wiens took the defeat graciously, even though he hasn’t lost the race since he first entered, in 2003.

VeloNews notes that Armstrong finished the second half of the race alone, something he says he probably wouldn’t do again.

With Farrar’s win and two of its riders placing in the Tour de France’s top eight overall, Garmin-Slipstream’s profile is continuing to rise in the cycling world. The team is in hot pursuit of Alberto Contador, Spain’s uber-cyclist and winner of the Tour de France, but catching him is going to be an uphill battle.