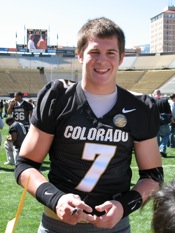 Lost in the drama over the Denver Broncos’ quarterback situation has been another quarterback battle raging just up Highway 36 in Boulder, where Tyler Hansen and Cody Hawkins are vying to play the top position for the University of Colorado Buffaloes.

The Longmont Times-Call runs through the differences between the two: Hawkins, son of head coach Dan Hawkins, has more experience and a ton of football intelligence, but he lacks size and power. Hansen is bigger and has the mobility of a poor-man’s Michael Vick, but lacks experience and is recovering from a broken thumb.

Meanwhile, Boulder’s Daily Camera reports that linebacker Doug Rippy is poised to wreak havoc on opposing offenses’ plans this fall. Last year Rippy was behind linebacker Brad Jones, the only CU player taken in the NFL draft in April, and coaches think Rippy can accomplish just as much.

This year’s Buffs are also making headlines in a case of player censorship. Cornerback Ben Burney recently saw his blog disappear after writing just one entry, reports the Colorado Daily. Burney was enlisted to write about what it’s like to be a college football player for CUBuffs.com, but apparently “Burney’s glimpse inside the program was a little too one-of-a-kind for folks in charge,” writes Westword, which uses the magic of the Internet to track down Burney’s original post.