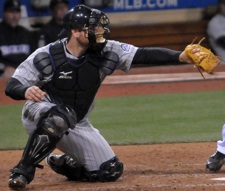 The Rockies seemed to have last night’s game well under control as they cruised into the ninth inning up 5-2 against the Milwaukee Brewers. But the Brewers tied it up, and the game went into extra innings, before Rockies backup catcher Chris Iannetta (pictured) launched a massive homerun into the Coors Field bullpens in the bottom of the 11th, his first-ever walk-off homerun (via Purple Row). The 7-5 win, coupled with a loss by the Atlanta Braves, moves the Rockies into a three-game lead in the National League wild-card race and means the Rockies need to win just three more games to clinch their second playoff berth in three years (via The Denver Post). The Rockies have two more home games against Milwaukee before traveling to Los Angeles to battle the Dodgers for the final three. If the Rockies end up tying the Braves, they’ll have a play-in game in Atlanta early next week. Meanwhile, Rockies second baseman Clint Barmes did the classy thing and admitted the acrobatic game-saving catch he made Sunday afternoon to beat the St. Louis Cardinals was actually a dropped ball, according to 9News. The actual speed of the play and the way Barmes rolled over to make the catch, along with the subsequent throw, made it appear as if he caught the ball.