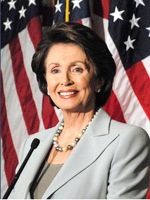 To get treatment for his injuries, Thayer racked up nearly $500,000 in medical bills, which he thought his insurance company would cover. Wrong.

He was denied because one of the payments he made to the company was late and also because, as a child, he had surgery for a club foot, an ailment that was deemed a “pre-existing condition” (via MSNBC).

Now, it seems, people like Thayer could have somewhere other than the private sector to turn for health insurance, as lawmakers begin to craft the details of a “public option” as part of health-care-reform legislation. But let’s not call it a public option anymore, says U.S. House Speaker Nancy Pelosi. How about “consumer option” or “competitive option,” Pelosi and a Democratic colleague propose (via The Associated Press).

U.S. Senate Majority Leader Harry Reid announced yesterday that a government-funded option will be considered, although it is unclear if Democrats have the votes necessary to pass the plan. Meanwhile, the cost of health-care reform is unclear as legislation is still being drafted and debated, allowing much political fearmongering—for and against.

An analysis by Anthem Blue Cross and Blue Shield of Colorado, the state’s largest private insurer, claims some Coloradans will pay as much as 140 percent for premiums under health-reform plans, according to the Denver Business Journal.

But Dede de Percin, a spokeswoman for the Colorado Consumer Health Initiative, an advocacy group that represents labor unions, calls the study “misleading and designed to scare Coloradans into accepting the status quo.”