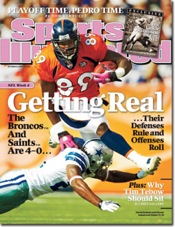 The Denver Broncos are cruising so far, off to a surprising 4-0 start and showing signs of improvement every week.

But there’s a long-held myth that being featured on the cover of Sports Illustrated causes a team or athlete to face a dramatic downturn shortly after publication. And guess who’s on SI’s latest cover? (Hat tip to Mile High Report.)

ProFootballTalk.com wonders if the editorial decision is a “kiss of death” for the Broncos, who seem to be getting a lot of national attention, including cornerback Champ Bailey.

Bailey will have a tough assignment this weekend covering Randy Moss of the New England Patriots. It’s a classic tale of student versus teacher, as Broncos head coach Josh McDaniels will take on his mentor and boss of the past eight years, Bill Belichick. Both downplay the match-up, calling it just another game on the schedule, though it’s clearly not.

Belichick tells The Boston Globe the game may be slightly different in that McDaniels knows a lot of New England’s personnel and, ostensibly, what their strengths and weaknesses are. Let’s hope that’s true. Sunday will be a tough game against perhaps the most consistently successful team of the last decade.