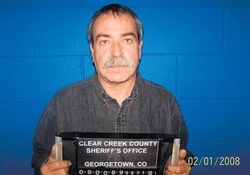 Almost 33 years ago, the body of 16-year-old Holly Andrews was discovered on a mountain. She had been raped and then stabbed to death the day after Christmas in 1976. For decades, the search for her killer went cold. But thanks to DNA, authorities were recently able to focus on a possible killer: Ricky Lee Harnish. Finally, earlier this week, Harnish, 54, stood in court and admitted that he was “guilty,” although part of a plea bargain could limit his sentence to no more than 24 years. Both Harnish’s admission of guilt and the deal he appears likely to receive leaves Holly’s brother, Dave Andrews, struggling with emotions. “I’m 60-40 on this plea bargain,” he tells The Denver Post. “Sixty percent of me is glad. Forty percent of me wishes this had gone to trial.”

Clear Creek Sheriff Don Krueger, in whose jurisdiction Holly Andrews’ body was found, is also having “mixed emotions,” according to Westword. “It doesn’t seem like that [sentence] should be enough. But at 54 years of age, I don’t know that it’s not going to be almost a life sentence.” Standing in the way of investigators’ search for truth at one point was serial killer Henry Lee Lucas’ fictional confession to Holly’s Andrews’ murder. But in 2005, Harnish was arrested on drug charges, and his DNA matched evidence on Holly’s body, giving investigators a solid lead. As of yesterday, Harnish remained in talks with authorities, who will agree to give Harnish the 24-year sentence if he provides an “honest and truthful accounting of details” of the rape and murder, writes the Post.