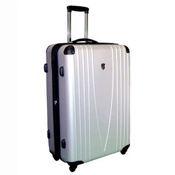 Perhaps it was The Luggage Blog‘s ravings about Southwest Airlines’ policy of checking bags for free—old-school style—that gave United Airlines the idea for its latest consumer promotion. But the largest carrier at Denver International Airport isn’t dropping the fees, after all. It will continue to put the squeeze on recession-struck Americans by instituting what is being promoted as a cost-saver—at least for people who fly a lot. Rather than pay $20 for your first bag and $30 for your second, Chicago-based United is offering a “premier baggage” service in which up to two bags are checked for “free,” writes the Denver Business Journal. The fine print: There’s an annual fee of $249 for the service. But you can get up to eight friends’ bags in for “free,” too. But no dice if you’re thinking you’ll buy the baggage service as a Good Samaritan. The program requires all tickets be purchased under the same confirmation number. As for Frontier Airlines, DIA’s second-largest carrier, it charges $20 for the first bag and $30 for the second these days, too.