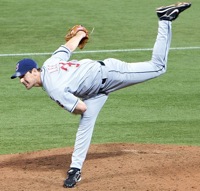 The Colorado Rockies have a flair for the dramatic, and perhaps they’re trying to keep the entire state of Colorado alert. They dropped the first game in the National League Division Series against the Philadelphia Phillies yesterday, running into a buzzsaw named Cliff Lee.

After being traded to the Phillies from the Cleveland Indians in August, Lee (pictured) has been among the best pitchers in the league, and he stayed true to form in his first-ever playoff performance.

The Associated Press writes that Lee “dominated” the Rockies, holding them to just six hits and retiring 16 straight batters at one point. Rockies pitcher Ubaldo Jimenez looked great through four innings, but quickly fell apart in the fifth. After a lead-off walk and extra-base hits surrendered to Raul Ibanez, Ryan Howard, and Jayson Werth, the game was pretty much over (via The Denver Post).

Convincing evidence suggests the Rockies got hosed on some terrible base-running calls (pictures via SB Nation). But, honestly, the Rockies fell flat yesterday and didn’t come up with timely hitting. The Rox can sneak back into the series if they pull out a win today, but it won’t be easy: Last year’s World Series MVP, Cole Hamels, will take the mound for the Phillies.