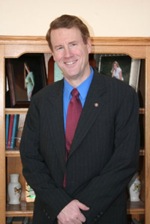 Last year, retired U.S. Air Force officer Hal Bidlack sought to unseat fellow Republican Doug Lamborn in Colorado’s Fifth Congressional District. Lamborn, as Associate Editor Patrick Doyle noted in an August 2008 profile for 5280, possessed impeccable conservative credentials but came under fire for his campaigning style. In the end, voters stuck with Lamborn, and Bidlack (pictured) moved on, most recently as a critic of hand-held devices used by troops in Iraq to detect bombs and other weapons, according to The New York Times. The sensor devices—known individually as an ADE 651–cost between $16,500 and $60,000 each. Iraq has bought more than 1,500 of the devices, but Bidlack, a retired lieutenant colonel, claims the devices work “on the same principle as a Ouija board”—nothing more than divining rods for explosives.