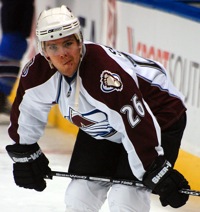 The Colorado Avalanche stopped the bleeding last night after pulling out a 5-4 win over the Philadelphia Flyers at the Pepsi Center. SportingLife.com points out that the Avs appeared to be cruising to an easy victory after taking a 5-2 lead late into the second period, but in an all-too-familiar pattern, Colorado let the other team back in.

Avs goalie Craig Anderson did just enough last night, stopping 30 shots and halting his 3-6-1 record in the last 10 games (via The Associated Press).

Avs star Paul Stastny (right) came out of his shell, scoring one goal and feeding his teammates two assists. The Denver Post thinks Statsny’s performance may quiet critics who question whether he’s living up to the five-year, $33 million contract extension he recently signed with the team.

Meanwhile, Marek Svatos, known for his scoring talents, reached a different kind of milestone last night: He got into his first NHL fight, an event worthy of praise, writes Mile High Hockey.

The Avs notched two points in the standings and sit at fifth in the league, two points ahead of the Calgary Flames for the top spot in the Northwest Division (via NHL.com).