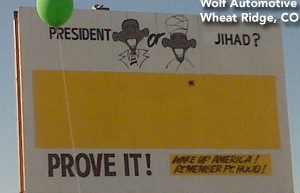 Anyone in the mood for a little boycotting this weekend might want to start with Wolf Motors. ProgressNow Colorado, a liberal activist group, is calling attention to the potentially offensive billboard the company has put up on its Wheat Ridge site.

The company seems to be in cahoots with local radio blowhard Peter Boyles, who has been promoting the often discredited but never silenced “tea party” and “birther” movements for months.

The often confounding, forever sublime First Amendment guarantees that Wolf, Boyles, and the rest of this curious brood are free to protest President Obama’s policies, of course. But the racially tinged caricatures of the president cross the line. It’s merely the latest and most localized evidence that certain people believe it’s okay to bring a little bigotry back now that an African-American has ascended to the highest job in the land. But it never was, nor will it ever be.

Maybe if these folks wised up and brought a little class to the debates they’d so dearly like to have, some common sense and common ground might rise above the noise.