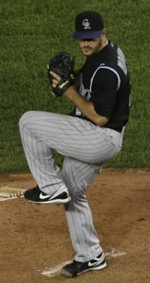 The notion that Colorado Rockies catcher Yorvit Torrealba may have played his last game for the Rockies appears to be true, as negotiations between the free agent and the team have seemingly broken down. The Denver Post reports that Rockies general manager Dan O’Dowd doesn’t think the two sides can bridge a $400,000 gap in contract negotiations.

“Negotiations can always change, but right now I’m not optimistic,” says O’Dowd, the clearest indication yet that one of the key players in the Rockies’ run to the playoffs last year won’t be coming back.

O’Dowd says the Rockies are still hot on free-agent catcher Miguel Olivo, who would presumably be backup for catcher Chris Ianetta.

Meanwhile, Rockies free-agent pitcher Jason Marquis has further clarified he won’t return to the Rockies in 2010. The latest buzz is that Marquis (pictured) wants to go to the Washington Nationals and that the Rockies are just fine with that.

MLB.com writes that Marquis, coming off one of his best seasons ever (15-13, with a 4.04 ERA and an All-Star appearance), is ready to play for one of the league’s worst teams, saying he can mentor young pitchers like John Lannan and Garret Mock the same way he helped Rockies pitchers Jorge De La Rosa and Ubaldo Jimenez realize their top-shelf potential.

Another Colorado pitcher is shaking up the baseball world. Former Arvada West High School star Roy Halladay, one of the best pitchers in Major League Baseball, is reportedly now playing for the Philadelphia Phillies, after a three-team deal sent him from Toronto to the team that knocked the Rockies out of the playoffs last year. The Phillies are giving up ace pitcher Cliff Lee in the deal, according to The Philadelphia Inquirer.