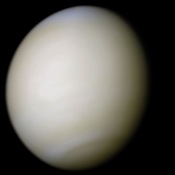 To unravel more of the mysteries surrounding the second planet from the Sun, University of Colorado scientist Larry Esposito proposes to send a spacecraft there. The planet Venus, he says, is fascinating because it is similar to the Earth in mass and composition. He tells the Colorado Daily, “Venus is like a twin sister of the Earth, and it’s gone terribly bad. The problem is global warming. The same problem we may have on the Earth.” He would like to send a lander to the edge of the Mielikki Mons volcano on the planet’s 872-degree Fahrenheit surface to take pictures, measure the composition of the surface, and even dig into the planet’s crust. The lander would probably last about three hours, much longer than the last ones, four probes that were sent in 1978. Esposito’s proposal is one of three, and NASA will make a final decision about which to fully fund in 2011, according to a NASA press release. Esposito is no stranger to Venus: “In 1983 Esposito used data from a CU-Boulder instrument that flew on NASA’s Pioneer Venus spacecraft to uncover evidence that a massive volcanic eruption poured large amounts of sulfur dioxide into the upper atmosphere and was 10 times more powerful than any volcanic eruptions on Earth in the past century,” notes a CU press release. “Esposito also led a team that took the first images of Venus with the Hubble Space Telescope in 1995.”