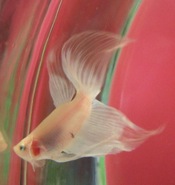 Bettas are fresh-water aquarium fish known for their spectacular colors and long fins. The males must be kept apart, otherwise you’ll quickly find out why Bettas are also known as Siamese fighting fish. But one Betta was unable to fend off the human attacker who invaded his owner’s home early Monday morning, according to 7News and Boulder’s Daily Camera. The incident began around 2 a.m., when a 19-year-old woman awoke and found a strange man standing in her apartment. She yelled and the intruder fled. The woman, apparently freaked out by the incident, also left her apartment, spending the rest of the night at a friend’s house. When she returned, she discovered $10 missing from her wallet and that her Betta had been beheaded, according to police.