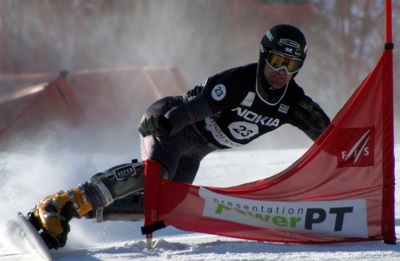 Aspen-based snowboarder Chris Klug, the first-ever organ transplant recipient to win an Olympic medal, will get to make another bid for the gold. The U.S. Ski and Snowboard Association has added Klug, who competes in the parallel giant slalom race, to the national team. The decision comes after Klug took eighth place in the final Olympic qualifying race in Quebec over the weekend, earning one of the two spots for the competition (via the Aspen Daily News).

Klug was a member of the U.S. Olympic team when the race debuted in 1998, but he made a name for himself at the 2002 Salt Lake City Winter Games, when he earned the bronze medal just 16 months after a liver transplant. He missed the 2006 Olympics due to a qualifying technicality, and this year he had to create his own training team and raise his own funds since he wasn’t on the national “A” squad, reports the Boston Herald.

“I’m really proud to have overcome some of the challenges,” the 37-year-old Klug says (via the Associated Press). “We set out to create our own team. It worked. I made it.”

Meanwhile, marketing consultants are saying Colorado figure skaters Rachael Flatt and Jeremy Abbott have the inside track for the gold, referring to advertising pay dirt. Flatt, just 17, is a straight-A student in Colorado Springs, and Abbott, 24, grew up in Aspen. The two young national figure-skating champions are ripe for branding and should score some generous endorsements, according to The Denver Post.