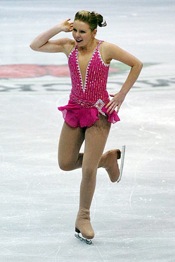 Flatt and 16-year-old Mirai Nagasu will represent the U.S. in the women’s figure skating competition at the Vancouver Winter Games, after edging out former Olympic silver medalist Sasha Cohen at the national championships last weekend (via Sports Illustrated).

Flatt is a straight-A student at Cheyenne Mountain High School, and the media has already developed a love affair with the five-foot-two, blond teenager who likes “The Office” and Dan Brown novels, People Magazine points out.

ESPN writes admiringly of Flatt and Nagasu’s energy and composure: “Somehow, they’ve both managed to balance school with chasing the Olympic dream, all while finding time to watch reality TV and update Twitter accounts.”

The young women are not expected to medal, but Flatt and her supporters are used to success. The Denver Post, which has assembled a photo slideshow of Flatt, notes that she “is a dark horse for a medal…. However, she has never failed in a big competition. No one is counting her out.”