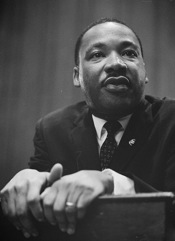 Denver’s Marade, the annual march and parade honoring the civil rights legacy of the Reverend Martin Luther King Jr., began yesterday with a wreath laying at the “I Have a Dream Memorial” in City Park. It ended three miles later with a rally of roughly 30,000 people at Civic Center. Among those who came out was Darzella Williams, who talked with CBS4: “No, we’re not done,” she said of continuing King’s fight for equality and justice. “This is not the beginning, but we’re making progress, and every day we just have to continue to strive and know exactly what it is that we’re here to do.” Marade-goer Goodson Beaugelin, who moved to Colorado from Haiti several years ago, called Haiti “a failed state” and told 9News the devastating earthquake “is an opportunity for all the nations to do something to help this country.” Meanwhile, Governor Bill Ritter, the Democrat who has decided not to run for a second term this year, said to applause that Colorado’s vitriolic politics are failed and “would absolutely bother Dr. King.”

“Let’s make a commitment today that we might have a level of discourse that is civil and righteous and brings people together,” Ritter said (via Westword). Nine-year-old Sophie Ward’s scooter rattled through the crowd with a homemade sign tied to the front reading, “PEACE,” King’s most important lesson, she said. “He said not to judge people by their color, but by their character,” Sophie told The Denver Post. “I think we could still do a little better.”