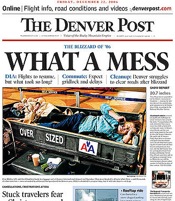 Last year, the Rocky Mountain News disappeared, leaving The Denver Post unchallenged as the metro area’s largest newspaper. But the Post’s publisher, MediaNews Group Incorporated, has struggled since then and is now expected to seek bankruptcy protection, making it the latest in a string of media companies looking for refuge from creditors, writes The Wall Street Journal.

Chairman and CEO Dean Singleton will retain control over MediaNews during a restructuring of the company, which holds dozens of newspapers, as well as radio and television operations.

“It was personally difficult for me,” Singleton says. “I’m a ranch kid from West Texas, and we don’t like the ‘B word.'”

Clearing up the company’s debt load could allow Singleton to lead newspaper-industry consolidation, which could create more efficiently run groups of papers. For instance, papers in Southern California published by MediaNews, Tribune Company, and Freedom Communications Incorportated could be combined.

For now, under MediaNews’ plan, senior lenders will swap debt for equity. The restructuring comes as daily-newspaper publishers around the country face a major slump in advertising due to the economic downturn and a loss of classified ads to free online services, according to the Denver Business Journal.

Meanwhile, Westword media critic Michael Roberts points out the Post’s headline on the development at MediaNews, which leaves out a key word that other newspapers do not: “bankruptcy.”