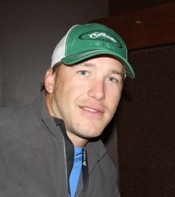 U.S. downhill skier Bode Miller took the bronze medal in the downhill at the Vancouver Winter Olympics yesterday, marking an impressive comeback from the brink of irrelevancy.

The 32-year-old wild card earned two silver medals in the 2002 Olympics but showed up at the 2006 games disinterested and focused on sampling as much of the local bar scene as possible. That episode led him off the U.S. ski team and out on his own, funding his travel to World Cup events and becoming the outcast of the U.S. ski community.

Then, last year, he got back on course, returning to the U.S. ski team for a World Cup in Beaver Creek less than six months before the Vancouver games.

The New York Times writes that Miller allowed himself to feel the emotion of ski racing again yesterday, “instead of competing with a cold professionalism, feeling at times as detachable as the bindings on his skis.” He now has three Olympic medals, the most of any American Alpine skier ever, notes the Los Angeles Times. Miller missed the gold medal by less than one-tenth of a second and has a chance to medal again in the super combined event.

The mantle for the best American skier at the Vancouver games was supposed to be Vail’s Lindsey Vonn, but she has been dealing with a deep shin injury since last week. Bad weather has delayed the women’s downhill practices and events, and Vonn’s pain has varied since a decent practice run Sunday. ESPN reports that Vonn’s shin felt “much worse” yesterday than it did during the Sunday run, with Vonn saying the bumpy course is “jarring” and extremely painful.

“It wasn’t bad skiing; it was fighting-to-make-it-down skiing,” she says. “It’s not a fun course…. I just have to grit my teeth and fight through it on Wednesday. And hopefully still come up on top.”