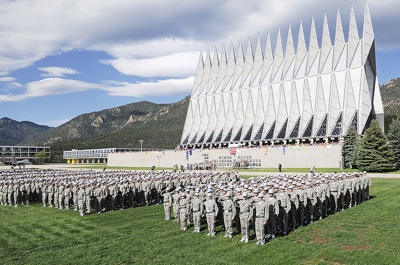 Just a few years ago, the Air Force Academy was considered a hub for religious intolerance. Upset over the treatment of his cadet son, Mikey Weinstein, who had also been a cadet, filed a suit alleging discrimination against Jews. Though a judge threw out the suit, the Air Force appears to have been listening. Now, Technical Sergeant Brandon Longcrier, a self-described pagan, is leading the charge to create a worship area atop a hill on the academy grounds for “Earth-centered” religions, reports the Associated Press. “Being with nature and connecting with it is kind of the whole point,” he says. “It will dramatically improve that atmosphere, the mindset, and the actual connection.” Lieutenant Colonel William Ziegler, one of the academy’s chaplains, says designating the space is part of the school’s effort to foster religious tolerance and to defend the constitutional guarantee of religious freedom. The Colorado Springs-based institution, known for its Cadet Chapel, already has worship facilities for Protestant and Catholic Christians, Jews, Muslims, and Buddhists, according to an Air Force Academy news release.