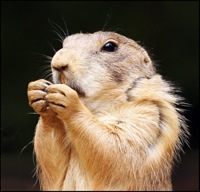 Tomorrow, Pennsylvania’s Punxsutawney Phil will tell us how long before spring approaches, but today the Denver Zoo is giving the spotlight to the prairie dog, writes The Denver Post. The occasion, in its third year, is meant to educate people about the role of the animal as a “keystone species” critical to Colorado’s food chain. Three species of the animal live in Colorado, and although none are listed as threatened or endangered by the federal government, some scientists think they should be. The animals reproduce just once a year—a litter of about three pups. As for all those burrow openings, there are usually more of them than prairie dogs. And move over dolphins and monkeys. It also turns out the lil’ rodents have one of the most sophisticated languages in the animal kingdom—second only to humans, according to a report in Britain’s Telegraph. Professor Con Slobodchikoff, a biologist at Northern Arizona University, has discovered that the prairie dogs’ bark is rife with information about colors, size, directions of travel, and even speed. So maybe the safe money is on Digger, a zoo prairie dog, rather than Phil. Digger emerged from his hole last week, seeing his shadow, predicting six more weeks of winter.