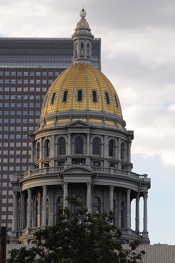 As state Representative Kent Lambert of Colorado Springs pushed the idea of taking severance-tax revenue from the extraction of gold and other precious metals to buy bars of gold for Colorado’s rainy days, a problem with the gold over his head lingered. The Colorado state Capitol building’s gilded dome “has fallen into serious disrepair,” writes the nonprofit Colorado Preservation Inc., and the state can’t afford the costs—$30 million by some estimates—of fixing it (via the Denver Business Journal). While such observations of the dome’s damage are certainly not new, the preservation group’s assessment is harsh, making it seem as if safety inspectors could walk in any day now and shutter the dome. “The cast-iron superstructure is rusting to the point that an architectural inspection team declared that ‘the potential loss of strength as a result of deterioration is a significant hazard to the building and its occupants,'” the group says, citing a 10-pound chunk of iron that crashed from the dome in 2007. Who’s to blame? Politicians, of course. Last year, the Colorado State Historical Fund approved a $3 million grant to get repairs started, but state lawmakers were unable to reach an agreement to contribute $8 million in matching funds. The group, which issued a list of several other “most endangered places” in 2010, such as Elkhorn Lodge in Estes Park, is now lobbying lawmakers to support repairs to the dome.