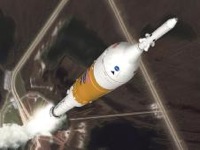 NASA had planned to return people to the moon by 2020, but President Barack Obama has proposed scrapping the program to save money, which means a crew vehicle designed and built by hundreds of employees of Colorado-based Lockheed Martin Space Systems would also be cut, according to The Denver Post. The Obama administration seeks to kill the Constellation program, which includes the Orion crew exploration vehicle and Ares launch vehicles because they are “over budget, behind schedule, and lacking in innovation.” The program aimed to create a replacement for the space shuttle that allows astronauts to reach low-earth orbit with a second, more powerful rocket and includes modules for a moon base, reports Christian Science Monitor. Lockheed Martin Space Systems officials haven’t commented, notes the Denver Business Journal, but the company issued a statement expressing disappointment, pointing out that the four-person Orion capsule has made significant progress in development.