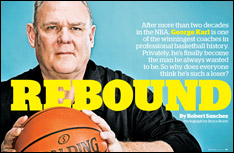 A familiar pattern reared up again last night at the Pepsi Center as the Denver Nuggets faced the Washington Wizards, the third-worst team in the league (via NBA.com).

The Nuggets looked bad in front of a sleepy crowd for more than three quarters of the game, in “a low-scoring affair that unfortunately resembled a WNBA game,” writes Denver Stiffs of the 97-87 result.

Carmelo Anthony wasn’t sleepy, however, leading the Nuggets with 29 points and 12 rebounds in the win. The Nuggets are still a half game up on the Dallas Mavericks in the Western Conference and four games behind the Los Angeles Lakers for the conference’s top seed.

Coach George Karl returned to the bench last night, but The Denver Post reports that he could barely talk above a whisper, the result of his ongoing treatments for throat and neck cancer, which had caused him to miss the last four games. Denver-based ESPN sports columnist Rick Reilly offers a glimpse into Karl’s life, balancing treatments, family, and coaching an NBA team in the midst of a playoff race. Reilly provides some touching moments from Karl, and asks the coach if he’s afraid to die.

“I’m scared every day,” Karl says. “Scared all the time. But my kids, my family, my staff, they keep me thinking positive.”

Karl and his family have been open about his battle, even keeping a regularly updated blog on their trials. It can be tough to read, such as when Karl’s young daughter Kaci Grace ponders life without her father.

“Anyone got a cure for hiccups?” he wrote on March 14. “They are the worst—along with the need for a new mouth! Owe! But the oxycodone and Fentanyl patches do launch you into a new world. I’m a little worried about getting hooked on these drugs, but everyone tells me not to get behind on the pain.”