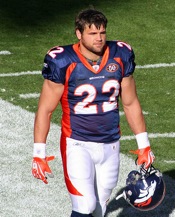 Ever since Denver Broncos head coach Josh McDaniels arrived in Denver a little more than a year ago, he hasn’t shied away from causing a stir in the team’s quarterback department.

The Denver Post reports that Quinn will push Orton for the starting job, although he’ll likely be the team’s backup quarterback, instead pushing the likable but maddeningly woeful Chris Simms out the door. Quinn was once a star at Notre Dame and was drafted in the first round in 2007.

Still, he’s never been remarkable, racking up 1,902 yards and 10 touchdowns in 14 games (via NFL.com). Then again, he’s been a member of the Browns, one of the NFL’s doormats over the last several years, since he came out of college. Quinn grew up in Ohio and, despite his struggles on the field, was a huge fan favorite. He tells the Cleveland Plain Dealer he’ll miss the fans in Cleveland most, but he couldn’t be happier to be headed to Denver.

It’s still unclear whether one of Quinn’s new teammates will be wide receiver Brandon Marshall. The often-troubled wide receiver visited Seattle during the first weekend of free agency last weekend, but he has yet to receive an offer. The National Football Post writes that the New York Jets are considering a package of players to trade for Marshall, but a New York Times beat writer claims the report has “no legs.”

It’s entirely possible that Marshall will be in Denver for at least one more year. And the Denver Post’s Dave Krieger thinks Denver fans should realize that Marshall’s situation is much more complex than most give him credit for and makes a case for treating him with more respect.