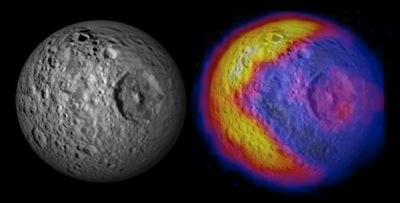 Cassini orbiter recently flew by one of Saturn’s moons, Mimas, conjuring up another image from a generation ago: Pac Man, of video game fame. “After much deliberation, we have concluded: Mimas is not boring. Who knew?!” says Cassini imaging team leader Carolyn Porco, who sent an e-mail announcing a temperature map of the moon that shows a warm region shaped like a yellow Pac Man (via MSNBC). The NASA spacecraft made the unexpected finding as it sped past the moon, one of 60 that orbit Saturn, on February 13. “We kind of fell out of our chairs when we saw that,” John Spencer, a scientist at the Southwest Research Institute in Boulder and a member of the infrared spectrometer team, tells the Daily Camera. Scientists still don’t know much about icy Mimas, where “warm” is considered 294 degrees below zero (compared to an average minus 320 degrees). But they now have loads of new questions about why the warm region exists and its behavior, and they plan to point their instruments at the moon again.