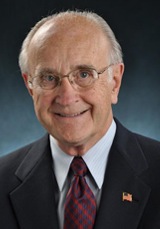 The University of Colorado’s Board of Regents has voted 8-1 to raise tuition by nine percent for in-state undergrads—the maximum amount allowable—on all of its campuses next year.

Though tuition increases will vary program to program, a good barometer of the increase is the $572 extra students will pay in the 2010-11 term to attend the College of Arts and Sciences, which is the largest academic unit on the Boulder campus, according to the Denver Business Journal. The tuition for programs in that college will total $7,018.

The hike is meant to fill a funding void left by cuts to higher ed in the state budget. CU officials estimate the increases will raise roughly $31 million in revenue, covering only about 20 percent of the cut in state per-student funding, points out INDenverTimes.

Regent Tillie Bishop (pictured), a Republican from Grand Junction, says the decision was hard, but “we either close our doors or look to our students and parents for the help we need” (via the Colorado Daily).

Regent Tom Lucero, a Republican running for Congress against Representative Betsy Markey in the Fourth Congressional District, isn’t so dramatic. He was the only member of the board to vote against the measure, saying, “We’re saddling the students with an unbelievable burden at this time.” ?