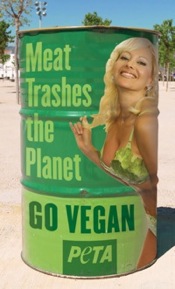 In Colorado Springs, where many streetlights have been turned off and trash cans removed from parks because of budget cuts, the highly conservative city council appears willing to entertain just about any offer for help, even from the controversial PETA, or People for the Ethical Treatment of Animals.

The animal-rights group wants to purchase trash cans for city parks that would feature an anti-meat slogan—“Meat trashes the planet. Go vegan.”—with a smiling blond wearing a bikini made of lettuce.

“If you allow PETA to advertise on trash cans, then you would also have to allow the Colorado Beef Council equal time,” Rivera jokes to the Colorado Springs Gazette.

Councilman Tom Gallagher, a fan of hamburgers, has no problems partnering with PETA, even if some carnivores in the city would be offended.

“At least they wouldn’t have to walk through trash,” he says. PETA has made similar offers in other cash-strapped cities around the nation.

Earlier this month, the group offered to shovel snow off sidewalks in Cleveland in exchange for permission to stencil a message reading, “Chained Dog? A Chilling Tail,” a message meant to shame dog owners who leave their pets outside in freezing conditions and vulnerable to frostbite, according to a news release.