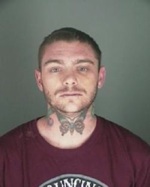 Brian Bonsall, the former Family Ties child actor whose latest arrest was the result of throwing a broken stool at a friend, “really does have a powerful addiction, and he has been dealing with this a long time,” his attorney, Yasmin Forouzandeh, told a court in Boulder yesterday. Though Bonsall faced numerous charges for more than one case spanning several years, a judge agreed with Forouzandeh and ordered Bonsall to treatment and two years of probation instead of straight jail time, reports the Daily Camera. The 28-year-old pleaded guilty to felony menacing and third-degree assault for attacking a friend in December 2009, as well as violating the conditions of his probation from a 2007 case, in which he assaulted his girlfriend. Bonsall must also perform 40 hours of community service, spend five days in the Boulder County Jail’s work-release program, and write a letter of apology to the former friend he attacked. Bonsall’s sentence was deferred on the felony charge, meaning if he behaves for two years it won’t show up on his record. Westword uses the case as a reason to take a stroll down mug-shot memory lane, looking at Bonsall’s sad pics, along with those of a few other former child stars.