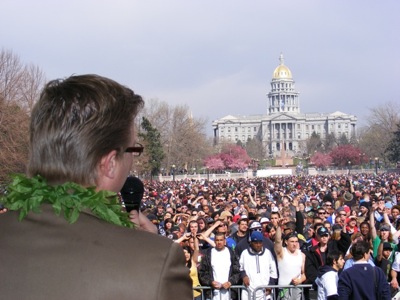 If you were anywhere near the Denver City and County Building or Boulder’s University of Colorado campus late yesterday afternoon, you have a good idea of what “4/20 Day” is all about. Large crowds gathered in Civic Center Park and the Norlin Quad for what has become an annual celebration of marijuana—and protest of the laws making it illegal.

At precisely 4:20 p.m., participants put lighters to pipe or joint and inhaled. Thousands of people showed up in both cities, inspiring well-known marijuana advocate and attorney Rob Corry to tell the throng in Denver, “Smells like victory” (via 9News). Corry (pictured on stage) promised to help anyone arrested by Denver police for lighting up illegally, as local officers seemed content to look on without intervening.

“Basically, we’re able to exercise our discretion at a time like this, and right now we have to say, ‘What’s the greater good for the city in this scenario?” said police spokesman Sonny Jackson.

In Boulder, a dispute has arisen over the numbers. University officials estimate 8,000 people showed up for the unsanctioned event, but the executive director of the CU chapter of NORML (the National Organization for the Reform of Marijuana Laws) tabulate that at least 15,000 people assembled, notes the Daily Camera, which also has video.

Meanwhile, Westword marijuana critic William Breathes (recently interviewed by correspondents from The Daily Show for an upcoming segment on pot) filed dispatches from Denver’s event. And dscriber’s GreenZone, has photos from both events (Boulder and Denver).