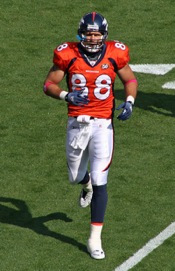 When Mike Shanahan was fired from his post as the Denver Broncos head coach after a disappointing 2008 season, on the way out the door he told reporters someone would have to be stupid to come in and mess with the team’s offense.

His successor, Josh McDaniels, did just that, running Pro Bowl quarterback Jay Cutler out of town a few weeks after his arrival and Pro Bowl wide receiver Brandon Marshall the year after.

Now, McDaniels is adding more fuel to some fans’ ire by shipping young star tight end Tony Scheffler to the Detroit Lions in exchange for a fifth-round draft pick.

Pro Football Talk thinks the Broncos got “screwed,” turning Scheffler, a second-round pick in 2006, into a fifth-round draft pick so soon into his career.

Perhaps McDaniels received so little in return for the NFL’s leading-yard-per-catch tight end because he made it so publicly clear through the “deal” he was offering that he had no use for Scheffler any longer. The Denver Post drives that point home, writing that Scheffler couldn’t be happier to be out of Denver and in Detroit.

Scheffler’s exuberance is somewhat understandable, considering he grew up an avid Lions fan in Michigan. But going from the Broncos to the Lions—for years an NFL doormat—shouldn’t be a good development in Scheffler’s career.

The Post also points out that three of four of Shanahan’s 2006 draft picks—Cutler, Marshall, and Scheffler—have been run out of town by McDaniels, with the only one remaining being defensive end/linebacker hybrid Elvis Dumervil.

“It’s unfortunate the way it ended [in Denver],” Scheffler tells the Post. “But it’s a business, and I’m excited about playing for the Lions.”