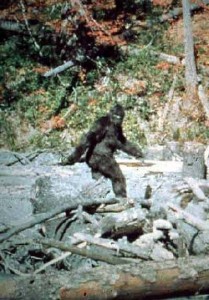 Bigfoot is alive and well—at least, the legend is. In Minnesota, for instance, the Northern Minnesota Bigfoot Society has received more than 75 reports in just three years that the beast is in that region (via KSAX television). In Texas, people have claimed for years to have seen a large, hairy, human-like creature with a musky smell, reports the Chandler and Brownsboro Statesman. And in Silverton, Colorado, Bigfoot hunters can ante up $250 for a chance to win $1 million for nabbing a picture of Bigfoot somewhere along the Rockies. Or they could have before the event went down the tubes, according to 9News. The contest’s supposed sponsors never heard of the event advertised through the website www.hunt4bigfoot.com—the baby of local Silverton businessman Rick Lewis, who owns Bigfoot Central, a gift shop and museum. Lewis has received several cease-and-desist letters from companies and government organizations he had implied were sponsoring the July 10-14 event at Kendall Mountain Resort. A string of official-looking logos on Lewis’ website implies that entities such as the U.S. Bureau of Land Management, the U.S. Fish & Wildlife Service, Nikon, Kodak, the city of Durango, Rocky Top RV Park, and the Durango and Silverton Narrow Gauge Railroad Museum are part of the event. 9News has tried to contact Lewis, but the news organization has only received a voicemail from him. He says he’s canceling the event, but plans to hold it next year. Just where he’ll hold it and who will be sponsoring it was unclear.