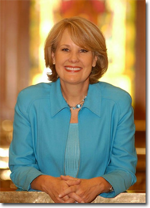 Coverage of a fundraising breakfast for antiabortion candidates by The Wall Street Journal and Politico has led to speculation that Sarah Palin will endorse Jane Norton in the Colorado race for U.S. Senate. Palin told the roughly 500 attendees at the Susan B. Anthony List political action gathering in Washington that the year “will be remembered for when commonsense, conservative women get things done for our country.” She put in a few plugs, including for former Lieutenant Governor Jane Norton.

“Palin’s praise could be a sign of a future endorsement of Norton, who has struggled to claim the conservative mantle in the race for the GOP Senate nomination,” according to The Huffington Post.

However, The Colorado Independent reports that tea-party-friendly Ken Buck is expected to receive his party’s nomination. Norton’s campaign is upset with ads being run by Buck allies, according to the Grand Junction Free Press.

On the Democratic side of the race, primary candidate Andrew Romanoff’s campaign is criticizing the sitting senator, Democrat Michael Bennet, for failing to protect college students from predatory lenders, according to The Colorado Statesman.