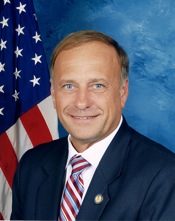 Yesterday, King elaborated, defending his remarks, which he says alluded to Obama’s reaction to an incident in which a white officer arrested a black Harvard professor for disorderly conduct in 2009, leading to a “beer summit” as a public service.

“I’m standing up against something that is or could become racism,” King tells Fox News, adding that Gardner, who is opposing incumbent Democrat Betsy Markey for the state’s 4th Congressional District seat, “simply caved in at the first sign of friction” without “bothering to call me.”

As for the Loveland Tea Party, which also canceled a separate King appearance planned for this weekend, King says it needs to get a “spine.” Northern Colorado Tea Party Director Lesley Hollywood told the Fort Collins Coloradoan that she called off King’s appearance because his remarks don’t “fit in with Tea Party values, particularly in northern Colorado.”

But King disagrees, claiming he called both Hollywood and Gardner on Tuesday after their cancellation announcements: “I have spoken with her and Cory Gardner both, and neither one of them disagreed with what I said or the position I have taken.”