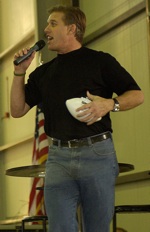 Various opinions have been put forth on what it will take to transform the Denver Broncos from a mediocre team in to an elite organization. Most of those opinions aren’t worth an over-priced beer at Invesco Field at Mile High, but occasionally one comes along that should be heeded.

A good place to start would be with John Elway, arguably the best Denver Bronco in the franchise’s history.

According to The Denver Post’s Woody Paige, Elway (pictured) and second-year Broncos head coach Josh McDaniels recently hooked up on the golf course, and the four-and-a-half-hour hangout session may finally open the door for Elway to return in a more active role with the Broncos after being spurned by former coach Mike Shanahan.

Elway will help with the team’s marketing, but he could eventually end up helping coach quarterbacks and perhaps even buy a minority stake in the team from owner Pat Bowlen. Elway doesn’t want to make day-to-day decisions, but he’s willing to be proactive in offering advice. He may, for example, be asked to provide an opinion on what to do with defensive back Champ Bailey.

Heading into his 12th year in the NFL (seventh in Denver), Bailey will make about $13 million this year (via Pro Football Talk). That’s fine—he’s earned it—but this is the last year of his contract, and Bailey says he wants to make mega-bucks for the next three or four years.

Problem is, the Broncos have other players who have more pressing contract needs—ahem, Elvis Dumervil—and the fact that Bailey is 32 years old probably won’t help him work out a long-term deal in Denver.