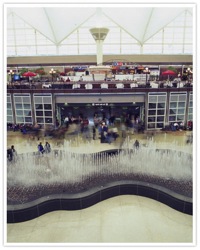 Despite the controversy surrounding “Mustang,” aka Bluecifer, and the new, 26-foot, seven-ton replica of the jackal-headed Egyptian god of the dead, Anubis, at Denver International Airport, officials remain silent on whether the sculptures should be removed. But now, Denver’s Commission on Cultural Affairs is focusing on another target: “Mountain Mirage,” the large water fountain in the middle of the terminal’s fifth level, which reaps some $2,000 in coins a year. The 3,100-nozzle fountain, designed by California artist Douglas Hollis, was turned off in March 2009 because of a leak in its basin liner. It will now be removed so that DIA can extend the underground train linking the terminal with the concourses, according to The Denver Post. The reasons are partially financial. It would cost $5 million to make repairs and move the pump to make way for the train, says Matt Chasansky, DIA’s public-art administrator. “Early this year, we decided that the most reasonable course was to request that the fountain be removed. It wasn’t a reasonable use of airport funds,” he says.