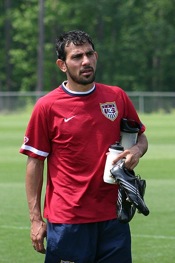 And the player who seems to be capturing most of the local media spotlight is Pablo Mastroeni, an Argentine soccer star and one of the more recognized Rapids members.

Mastroeni shares his 2002 and 2006 World Cup experiences with the Colorado Springs Gazette, saying he plans to spend a few days in Las Vegas this weekend watching World Cup games with teammate and Denver native Conor Casey.

Mastroeni’s U.S. national team days are behind him forever, but he’s OK with that: “That time is past. I’m living in the present. I’m not stuck in the past, not stuck in the what-ifs. I can’t ask for much more.” Unless, of course, it’s from Hana Matsuri, a Westminster Japanese-fusion eatery, where Mastroeni likes to dine when he’s not cooking in his Broomfield home, according to Westword’s Cafe Society.

But not all of the headlines are so light. The MLS has announced that it will double Mastroeni’s fine for taking too long to leave the field after earning a red card Saturday.

The Associated Press reports the league will take $500 from Mastroeni’s pocket for the incident, twice the presumed amount for striking the Columbus Crew’s Steven Lenhart in the 76th minute of Saturday’s 1-0 Rapids win. Mastroeni is among the better-paid MLS players, earning about $300,000 per year.