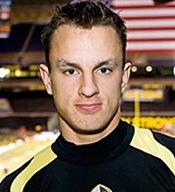 The football team at Valor Christian, a small high school in Highlands Ranch, could remain undefeated state champions this fall, but it won’t be easy: The school is moving from the 3A class to the 4A class, which will pit the team against bigger and tougher foes.

As The Denver Post reports, Valor’s star players, quarterback Brock Berglund and Carzell Vickers, are confident they can lead the team to more glory. At the very least, the duo will spend the fall under a bright spotlight as two of Colorado’s top college recruits.

Berglund (pictured) has already committed to the University of Colorado, so his performance will be watched as a precursor to what he’ll contribute to a faltering Buffaloes team the following year. Carzell hasn’t committed to any college yet, but he’s reportedly received interest from several schools, including CU, Colorado State University, Minnesota, and San Diego State.

Berglund tells the Post he’ll attempt to convince Vickers to follow him to CU. According to the Colorado Daily, Berglund is intent on bringing the best recruiting class to Boulder in 20 years. And that will likely prove his even greater challenge. Given the current state of the Buffs, it’s hard to see the football team breaking out of the lower third of the new Pac-10. That’s also assuming Berglund will get to start at CU.