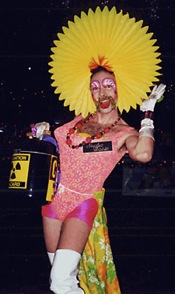 Comedic drag queen Nuclia Waste, Denver’s glittery answer to Dame Edna, has come up with a publicity stunt that’s sure to grab some attention. After losing a graphic design job she’s had for 13 years, poor Nuclia will “jump off a 32-story building in downtown Denver,” according to a press release. No, Nuclia isn’t suicidal. “Some people lose their job and become depressed,” she explains. “Instead, I’ve decided to jump off a building and raise money for the Cancer League of Colorado. It’s better than standing on a corner with a sign that says, Will Drag For Food.” Never mind that Nuclia is also deathly afraid of heights. The event at luxury high-rise Lincoln One Place is scheduled for 5 p.m. on August 27, making it a potential rush-hour clogger.

Nuclia hopes to raise $3,000 through sponsorships for the big jump at overtheedge.blacktie-athon.com. And in case you’re wondering, Nuclia will not so much be jumping off as rappelling down the building, but it should be a spectacle nonetheless.