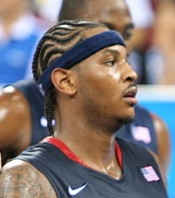 With the hoopla surrounding tonight’s announcement from LeBron James on where he’ll ply his trade for the next few years, the contract situation between the Denver Nuggets and Carmelo Anthony has taken a distant second stage.

And it’s now likely that the Nuggets’ offer will continue to gather dust, as Melo prepares for a wedding and a summer spent with his family. While there are indications that he’ll sign the deal, Anthony has until summer 2011 and could end up taking most of the year to decide. One Sports Illustrated columnist is encouraging him to do just that.

After all, next summer Melo will be the biggest star on the free-agent market, and if the NBA and its players concur on a new collective bargaining agreement, he would receive attention on par with what James is seeing right now. And Anthony won’t likely stick around on an aging team with no real shot of beating the Lakers or any other powerhouse.

With the bloated contracts the Nuggets owe players like Kenyon Martin, Chris Andersen, Chauncey Billups, and Nene, there’s no chance the team will be able to sign the type of players that will keep Melo in Denver, writes Denver Stiffs. That points to him taking time to sign the contract, and the more time passes without any significant moves from the Nuggets’ brass, the more likely Carmelo Anthony will consider other teams.