The night before he would transform from a small-town institution to an international headline, Louis Heckert danced like a younger man. All night long, on the “Louie Heckert Dance Floor,” in the middle of the Lariat Saloon, the townie bar to end all townie bars, the Grand Lake watering hole where he’d been spending Saturday nights for as long as anyone cared to remember.

Dozens were on hand to wish Louie well that night in late March 2006—people who knew him, and others who claimed to have known him a long time but were barely alive when he was mayor. That was some 50 years ago, and Louie had since become someone else—still very much respected, but what was it exactly? An elder? A civic mascot? A codger who was spending the years associated with Matlock reruns and incontinence pads dancing till the band was done? 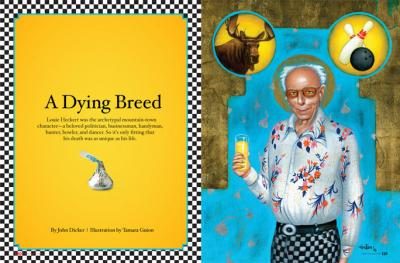 In his honor and as part of the Lariat tradition known as “Louie Heckert Night,” Louie’s friends were decked out in mismatched button-down shirts and pants, the caliber of dress patterns and fibers that screamed “tourist” so loud any pickpocket within a 100-mile radius might hear. The dress-up was a friendly jab and an homage to Louie, who was to polyester what Imelda Marcos is to espadrilles.

Louie Heckert Night, as usual, fell on the Saturday before his official birthday, which this year would have been his 92nd. The regulars would all agree that the guest of honor was in rare form that night. “I don’t think he missed a dance,” says Steve Cormey, whose three-piece—sometimes two-piece—ensemble has gigged the saloon for the last 25 years.