One of my first food memories is of munching happily on hot fry bread dripping with honey while my grandmother chatted with her Oglala Lakota friend Princess Blue Waters. Each July, the Oglala came to the Indian Village at Cheyenne Frontier Days for the weeklong festivities. Summer visits with her old friend was an annual ritual for my grandma and a special treat for me.

As an adult, I still love eating fry bread, but I’ve come to appreciate the depth of Native American cuisine, especially that of the tribes most commonly associated with Colorado: the Cheyenne and Arapaho (both known as buffalo hunters), Ute, Pueblo, Comanche, and Apache. 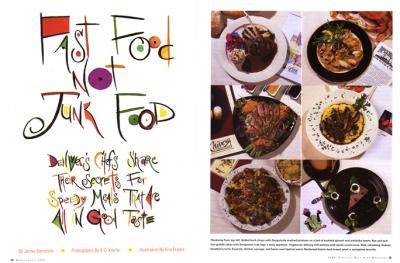 In our era of mass production and fast food, there’s much we can glean from adopting the indigenous diet of the desert-dwelling early Americans. Their table was sophisticated, with several varieties of fresh and dried corn, beans, squash, wild rice, tuber vegetables, wild onions, berries, seeds, herbs, and wild game. Food was highly valued for its medicinal and preventive properties, not just its nourishment, and American Indians instinctively understood what science has now proven: Blue corn contains high levels of antioxidants, buffalo meat is lean and protein-rich, prickly-pear cactus moderates the body’s sugar levels, and summer squash packs fiber, magnesium, and vitamin A.

In the last decade, the food industry has seen the dawn of a new era with the Slow Food Movement and the similarly minded Native Food Movement, calling for a return to indigenous foods. The Internet has made ingredients such as traditionally harvested wild rice, parched corn, and chokecherry syrup easily accessible, while heritage crops such as tepary beans are becoming more mainstream. A major turning point took place in September 2004, when the National Museum of the American Indian opened in Washington, D.C., with an in-house cafeteria, The Mitsitam Cafe, serving regional specialties including Plains Indians’ buffalo chili and fry bread with cinnamon. Recently, a handful of native food restaurants have opened in Colorado, Arizona, and New Mexico. As a whole, the food of the American Indian has evolved for the modern day even as the indigenous ingredients remain firmly rooted, both physically and spiritually, to the land.

Most of the ingredients are sold at your local supermarket, while harder- to-find foods such as traditionally harvested wild rice are available through mail order. The recipes that follow were collected from generous Native American cooks, and most were first published in Spirit of the Harvest: North American Indian Cooking.

Beverly Cox is the food editor for Native Peoples Magazine and the author of 12 cookbooks, including Spirit of the Harvest: North American Indian Cooking.

Before Euro-American arrival, American Indian life was largely nomadic and centered around the bison. This sacred animal provided the Cheyenne, Arapaho, and Ute with the fundamentals: food, clothing, and lodging.

Ember roasting was a simple Plains cooking technique in which fresh meat was cooked directly on the embers of a hardwood fire. Traditionally, a buffalo roast might be seasoned with wild onions and sage, but threading green onions through the roast infuses the meat with flavor and produces a beautiful presentation.

Prepare a fire in a barbecue grill with the mesquite. Using a knife-sharpening steel or long, narrow-bladed knife, make 6 horizontal holes—about 1 inch apart—through the roast. Push a green onion into each hole. Rub roast with oil and seasonings. When flames have died down and coals are red hot, spread the coals into a bed 2 to 3 inches wider than the roast. Place roast directly on hot embers and cook for about 10 minutes per pound for very rare, or 15 minutes per pound for medium-rare. Turn roast with tongs every 3 to 4 minutes to char it on all sides. For a less-charred exterior, cook the roast on a grill above the coals.

Some of the Plains tribes may have originated near the Great Lakes and in the northern woodlands, where wild rice grew in lakes and marshes. The Native Americans used sticks to bat the reeds, filling the bottom of their canoes with the nutty seeds. Rice became an important trade item, and through tribes such as the Hidatsa it found its way to the buffalo hunters of the Plains.

Preheat oven to 350°. Cut off squash tops, set aside, and remove seeds and strings. Brush inside of squash with maple syrup, and sprinkle with mustard, salt, and pepper. Heat oil over medium heat in a large skillet, and add meat and onion. Sauté over medium-high heat until browned. Remove from heat and stir in cooked wild rice. Season to taste with sage, salt, and pepper. Stir in eggs. Stuff squash, place in a shallow baking pan filled with ½ inch of water, and cover with aluminum foil. Bake for 50 to 60 minutes until squash are tender when pierced with a knife but still hold their shape. Add more water to the pan as necessary to avoid sticking. Bake squash tops separately. Just before serving, place tops on the squash, slightly askew.

Fry bread is one of the most widespread of modern American Indian foods. It is served at powwows and other Native American gatherings as a festive snack, and remains part of everyday cooking. Though recipes vary slightly from one tribe to another, the basic ingredients—flour, baking powder, salt, and water or milk—are largely the same. The basic dough is patted or rolled into the desired shape (round, square, or triangular, depending on the region) and deep-fried until puffed, crisp, and golden.

Serve fry bread with honey or powdered sugar, or do as the Plains tribes do and top the puffs with sweetened chokecherry syrup or sauce. Savory versions also exist—Southwestern breads sometimes have chopped onions and chiles mixed into the dough. Another modern favorite is the Indian taco, where fry bread is topped with ground meat, lettuce, tomato, cheese, and salsa.

In a mixing bowl, combine all ingredients, except oil, and knead until smooth. Rub 1 tablespoon of oil or shortening over dough. Cover and let sit for about 30 minutes. Pat or roll a piece of dough into a circle about the size of your palm and 1/8 inch tick. Deep-fry in hot oil or shortening.

The Anasazi were an ancient agricultural people who are believed to be the ancestors of the modern Pueblo people of New Mexico, Arizona, and Mexico. When settlers first encountered Pueblo ruins, they found spotted beans growing wildly around the area. In the 1950s, archaeologists in the Four Corners region discovered pottery containers filled with those same dried beans. Today Anasazi beans are grown and sold commercially.

Place all ingredients except salt and pepper in a large saucepan and bring to a boil. Reduce heat to a simmer and cook, covered, for 3 to 4 hours, or until beans are tender. Season with salt and pepper. Ladle soup and lamb into bowls.

In this Pueblo recipe, two traditional ingredients, pumpkin and piñon nuts, are combined in a spicy, cakelike bread. Serve it lightly toasted for breakfast or topped with ice cream for dessert.

Preheat oven to 350°. In a mixing bowl, combine flour, pumpkin, sugar, butter, eggs, baking powder, cinnamon, nutmeg, and salt. Mix well until combined. Stir in nuts. Place batter in a greased 4 ½-by 8-inch loaf pan. Bake for 50 to 60 minutes, or until a knife inserted in the bread comes out clean.