In normal years, assessing Denver’s hottest neighborhoods is pretty predictable business. Of course, 2010 is, and 2009 was, anything but normal. As the Mile High City—and the nation—begins the slow recovery from the housing crisis, many of the city’s most desirable neighborhoods have seen marked corrections. That’s not a bad thing, per se, as these communities (think East Wash Park, University Park, and Country Club) are still highly sought after, even if the sales data aren’t quite as rosy as they’ve been in the past. The good news, though, is that the benefactors of these micro-market corrections are, mostly, the areas around the city’s classic neighborhoods—and the long-term effect of this phenomenon will be to expand Denver’s overall livability. Whether you’re buying, selling, or staying put this year, these are the places to be in Denver right now.

One of the few neighborhoods in this exclusive part of town where prices actually appreciated in the past year. This lush oasis (think ranch-style homes and quiet streets that don’t conform to the city’s grid) in central Denver draws a higher-end dweller—primarily families and empty-nesters with the taste and income for the finer things. Still, Belcaro offers relative bargains to luxury-market homebuyers, although sellers should be patient: Listed homes spent 183 days on market (DOM) last year, compared to a citywide average of 97.
Average sale price $845,000
+8% over 2009 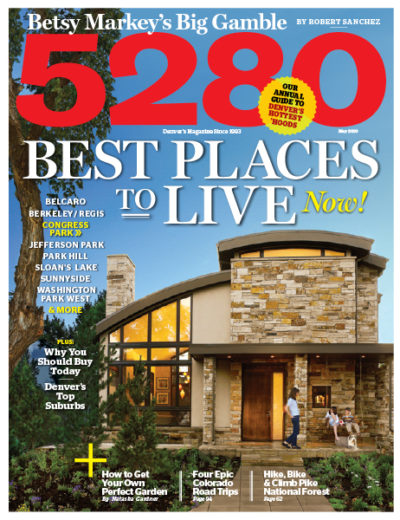 This slightly hipper, grittier alternative to Wash Park East (average sale price: $654,000) has all the access to its neighbor’s amenities, but at a far lower cost. This primarily residential neighborhood is surrounded by numerous retail districts, whether new (Pearl Street, north of I-25) or revitalizing (South Broadway). Lately, more young couples and families have been landing in the area to take advantage of its leafy streets, reasonably priced housing that hasn’t been as overwhelmed by scrapes and duplexes as have some of its neighbors, and, of course, the neighborhood’s biggest draw, Wash Park itself, which teems with activity even during the chilly winter months.
Average sale price $395,000
+1% over 2009

The Highland boom spreads north and west as Denverites take advantage of the area’s easy access to I-70 and the mountains, along with the ongoing development of the Tennyson Street corridor. The Regis University campus, the funky-cool old-school Lakeside Amusement Park, and lots of green space and architecturally interesting new or remodeled homes make these adjacent ‘hoods most attractive to couples and young families who might be priced out of Highland but still want to be close to the action of Highlands Square and the 32nd Avenue and Zuni intersection.
Average sale price (Berkeley) $283,000, +8% over 2009
Average sale price (Regis) $212,000, +11% over 2009

The low prices and proximity to City Park, bike trails, and the rest of Park Hill have made this neighborhood of well-kept, single-family Tudors and bungalows an attractive, affordable alternative to other east-side areas such as Hale and Hilltop. PHE is dotted with small shopping districts and a variety of quaint restaurants serving Italian, Thai, soul food, breakfast—you name it. With quick access to shopping in Stapleton, this neighborhood will appeal to anyone looking for an entry- or mid-level home that’s bound to appreciate over the next several years.
Average sale price $204,000
+5% over 2009

We’ve been touting this neighborhood for years as an up-and-comer, and it’s finally arriving as a focal point for homebuyers who want to get in on the northwest Denver boom. True, it’s a bit grittier than its more expensive neighbors, but it lures cutting-edge types who are willing to endure the “refinement” process rather than wait until everything has been upgraded (and potentially overpriced). Sunnyside’s unusually affordable homes—lots of modest bungalows—mean inventory is low, so buyers must be prepared to act fast.
Average sale price $181,000
+13% over 2009

Between the burgeoning Edgewater commercial district, Sloan’s Lake East, and Highland, the area around Denver’s biggest lake is fast becoming the go-to ‘hood for people who want quiet surroundings with easy access to downtown, northwest Denver’s shopping and nightlife, or quick mountain getaways. The lake itself—which not long ago was a place to avoid after dark—has become a landing spot for joggers, boaters, and water skiers, and the sleepy surrounding streets make the neighborhood attractive to families with children.
Average sale price $341,000
+9% over 2009

This cozy enclave still has a rich Latino heritage and provides a lower-cost option—with equal access to northwest Denver’s amenities and striking views of downtown—than the more established Highland neighborhood to the north. The Speer and I-25 borders funnel traffic around the area rather than through it, which makes the streets surprisingly quiet, day and night, and many of the modest homes are ripe for remodeling or flipping. Despite the area’s proximity to Invesco, the chaos is minimal on football Sundays thanks to a well-run traffic-management plan, and JP’s average of 46 DOM shows how quickly its properties are moving.
Average sale price $260,000
+9% over 2009

Along with its neighbor Congress Park North, this was one of the few areas in central Denver where values appreciated last year. One of downtown Denver’s first “suburbs,” CPS is now one of the oldest and most desirable and vibrant neighborhoods in the city, with many remodeled Victorian-era homes. It has become a vortex around which couples, families young and old, hipsters, and yuppie singletons revolve. The ‘hood is also near the quietly luxurious Cheesman Park and Denver Botanic Gardens, giving the whole area a neighborly, walkable—yet still urban—feel.
Average sale price $445,000
+9% over 2009

Why some typically reliable neighborhoods had a rough year.

When we started to rate Denver’s best neighborhoods in 2010, we found the usual suspects in some unusual and unfamiliar situations. Homes in Highland East, Central, and West, for example, dropped in value across the board (from 4 to 11 percent), as did houses in Cheesman Park (down 5 percent from 2009), Country Club (-1 percent), University Park (-15 percent), and Wash Park East (-3 percent). And Cherry Creek, Denver’s answer to Beverly Hills, saw its average sale price plummet by 14 percent—with an average DOM of 218, more than twice the citywide rate.

Fear not: This doesn’t mean these tony areas are hitting the skids; they’re merely going through a more pronounced correction, and their numbers appear more alarming because their prices were so high to begin with and thus have farther to fall. (Even with the downturn, the average sale price in Cherry Creek is $834,000, and the glut of unfinished scrapes is skewing prices all over town.)

The precipitous correction in some parts of Denver belies the more rational one happening in the overall market. Lon Welsh of Your Castle Real Estate cites Hilltop—$803,000 average sale price, down 3 percent from 2009; 198 DOM—as an area where overspeculation warped the numbers. “They have more than 20 houses on the market that are 2,500 square feet or more and cost up to $3 million,” he says. “People are buying the smaller homes in the area, but because they’re only selling the Chevys instead of the Cadillacs, the average prices come down more steeply.”

Think you can do it on your own? Perhaps you can. But if you’re seeking a pro, here’s what to look for in a Realtor.

The local housing market’s cautious revival is stirring buyers and sellers from their fretful slumber of the past few years, hopefully armed with new wisdom they’ve gleaned from the crisis. Local real estate agents say they’ve already noticed a difference in their clients. “The overall mentality is a lot more realistic; people are finally realizing that they can no longer use their home as a checkbook,” says Kentwood City Properties’ Liz Richards. “Sellers are realizing that if they want to sell, they need to put more weight into their agents’ opinions than they did before. During the boom, they thought a monkey could do our job.” She says the housing downturn winnowed many part-time pretenders from the realty field and also convinced people of the value of having a true pro to help buy or sell a home. Even so, the quality of Realtors and lenders still varies widely, so it’s crucial to know how to find a good one.

As new urbanism catches on, a dearly held Real estate axiom gets a 21st-century update.

We’ve heard it a million times: The three most important factors when buying a property are location, location, location. This remains as true as ever, but in 2010, the things that make a location desirable are changing, possibly for good.

This is especially true in Denver. Over the past decade, groups such as the Downtown Denver Partnership and the efforts of Blueprint Denver, buoyed by the advocacy of Mayor John Hickenlooper’s administration, have spurred numerous efforts to make the city more inviting to a broader demographic. The folks who once might have chosen their homes based on proximity to freeways, shopping malls, and quiet suburban cul-de-sacs now would rather live in denser—though still safe—urban neighborhoods with easy access via foot or RTD light rail to downtown attractions such as restaurants, coffeeshops, museums, and parks. (And, particularly in Denver, bike trails.) “People’s understanding of ‘location’ and why it matters is changing dramatically,” says Paul Tamburello, a broker at Distinctive Properties. “Now it’s sustainability, walkability, access to public transportation, and the quality or ‘soul’ of a neighborhood.”

This trend includes families that may have fled to the suburbs once the kids arrived. Liz Richards, an agent with Kentwood City Properties, recently sold two Lower Highland townhomes to young families, to her astonishment. “I was sure they would go to DINKs”—Realtor-speak for “dual-income, no kids”—”but both went to parents with small children,” she says. “It’s really blown my mind how many couples like this are looking in northwest Denver. In the past, families like that would’ve just stuck with Wash Park, Platt Park, or Bonnie Brae, but they’ve either done the research on the schools and have decided to get more involved with them, or the schools have improved and they’re pleasantly surprised.” She credits the revitalization of retail corridors such as Tennyson Street and LoHi’s Navajo Arts District for beginning to create a central community that draws people to the surrounding neighborhoods.

The melting reticence about raising kids in cities also has influenced how urban developers and architects design their projects. Michael Tavel of Michael Tavel Architects says that the past 10 years have seen a return to urban mixed-use neighborhoods, but in the past year there’s been a spike in environmentally conscious design that takes family lifestyles into account. “A lot of the [green] literature is about gauging environmental impact on an individual basis, and they’ve concluded that dense cities are by far the greenest situation,” he says. Tavel adds that the newest trend in neighborhood redesign is “how to make them work for five-year-olds,” such as multiunit complexes with safe common areas where parents can live in cities but still let their kids go outside and play. Taken together, all these sea changes underline how the “location” mantra has taken on a decidedly more urban feel.

Everyone’s wired these days. Here’s how to do your house-hunting homework with little more than a DSL connection.