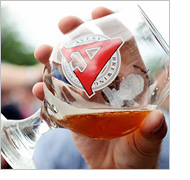 It is no secret that I’m a fan of sour beers, which is why I couldn’t miss this weekend’s third annual Boulder SourFest at Avery Brewing Company. Although sour brews are still firmly outside of the mainstream, judging by the crowd at this weekend’s festival, the style is gaining popularity. (Hundreds of tickets for the event, which featured 59 sours brewed in eight states, sold out in minutes.) My taste buds took a beating, but I did my best to keep track of what I sampled. Here, in no particular order, a few favorites. 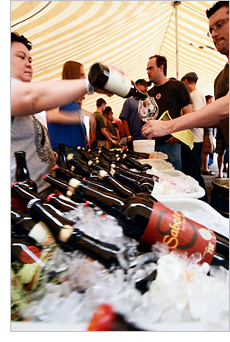 Avery describes this beer as a “merciless dark sour.” They aren’t kidding. This sour ale, aged in Zinfandel barrels, is relentlessly tart. The beer pours a dark mahogany color and the aroma is packed with Zin notes like black raspberry and cherry. The sour flavor hits immediately and is accompanied by a subtle dark chocolate flavor.

This incarnation of Great Divide’s famed Yeti imperial stout incorporates Brettanomyces (a particular type of yeast that adds a sour character to beers). The brew pours almost black with a thin head. The nose is full of chocolate, malt, alcohol, licorice, and a little Brett. Stickier than most Yetis, this brew coats your mouth and lingers on your palette.

This may be the most refreshing sour beer I’ve had. The golden ale is aged exclusively with Brettanomyces (see above). The brew is pleasantly carbonated, and the sour flavor—which doesn’t overpower—is joined by fruit and citrus notes.

Portland-based Cascade Brewing was one of the more popular stops at the SourFest—for good reason. The Vine—a blend of sour tripel, blond, and golden ales fermented with the juice of white wine grapes—was heavenly.