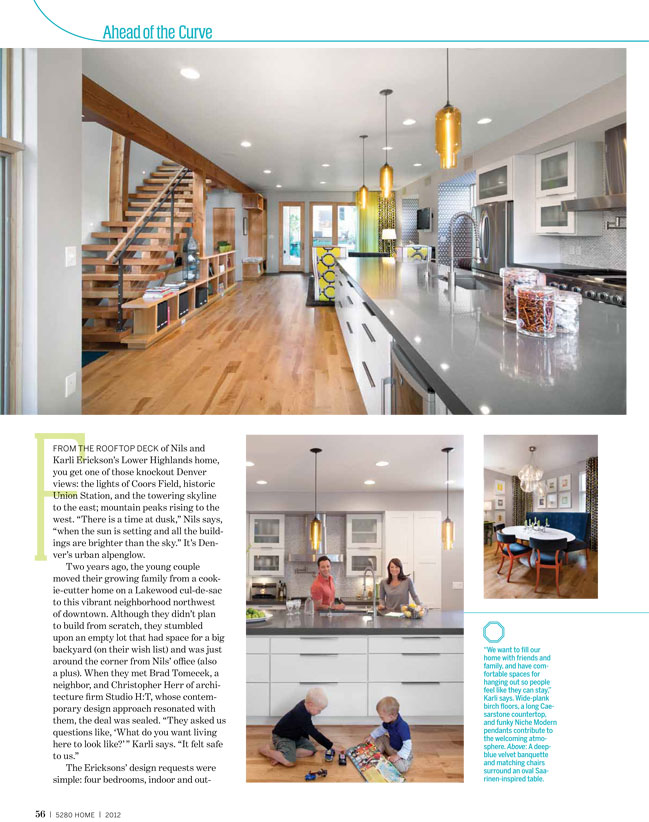 From the rooftop deck of Nils and Karli Erickson’s Lower Highlands home, you get one of those knockout Denver views: the lights of Coors Field, historic Union Station, and the towering skyline to the east; mountain peaks rising to the west. “There is a time at dusk,” Nils says, “when the sun is setting and all the buildings are brighter than the sky.” It’s Denver’s urban alpenglow.

Two years ago, the young couple moved their growing family from a cookie-cutter home on a Lakewood cul-de-sac to this vibrant neighborhood northwest of downtown. Although they didn’t plan to build from scratch, they stumbled upon an empty lot that had space for a big backyard (on their wish list) and was just around the corner from Nils’ office (also a plus). When they met Brad Tomecek, a neighbor, and Christopher Herr of architecture firm Studio H:T, whose contemporary design approach resonated with them, the deal was sealed. “They asked us questions like, ‘What do you want living here to look like?’?” Karli says. “It felt safe to us.”

The Ericksons’ design requests were simple: four bedrooms, indoor and outdoor entertaining spaces, and a play area for their two small children, Bodie, five, and Tate, two. It all seemed straightforward to Tomecek and Herr. But their resulting design is anything but, thanks in part to the home’s unusual mix of neighbors. The site is bookended on the west by a three-story, multifamily condominium complex, with balconies that overlook the lot, and on the east by Our Lady of Light monastery, where the nuns have occasional silent hours. In an inspired example of form-meets-function, the design duo developed a gently curved vertical piece—resembling a ship’s sail—to create privacy for the Ericksons and their condo neighbors, and then placed the quieter living areas, such as bedrooms, on the east side of the property out of respect for the nuns. The curve also fits within the bulk-plane restrictions (the invisible envelope that determines how big a house can be) set by the city for new residential construction.

The curve is the home’s dominant feature. Friends and neighbors affectionately refer to it as the sail, or ship’s hull, or whalebone; the architects have dubbed it the “shield house” for the buffer the curve creates from the neighbors. The shield is crafted from Douglas fir timbers—each vertical rib is connected with wooden shims and dowels, not glue or nails. Inside, the curve gives contrast to the staircase’s Jenga-like horizontal wood slabs and scoops sunlight from the third-story windows to create an organic, dappled-forest vibe.

Andrea Schumacher and Shadie Copeland of Denver’s O Interior Design were brought onboard to do the interiors. “The homeowners wanted to create a space that exudes a sense of fun for their kids, while also being a sophisticated place for entertaining,” Copeland says. Playful splashes of color, texture, and pattern—like the Gainsborough slate-blue velvet fabric on the kitchen banquette and the powder room’s graphic-print Sanderson wallpaper—bring this vision to life.

Outside, a spacious backyard makes room for an edible garden, outdoor kitchen, sandbox, and deck—which doubles as a stage and seating for impromptu children’s performances. Landscape architect Courtney McRickard of Denver’s Three Sixty Design created the yard’s pièce de résistance, the fireplace seating area, where a vertically hung, laser-cut image of the constellation Perseus (in the sky directly over Colorado every summer) is backlit, creating a luminous setting for conversation. The result is a series of seamless spaces that are sunlit and welcoming and offer unexpected richness. 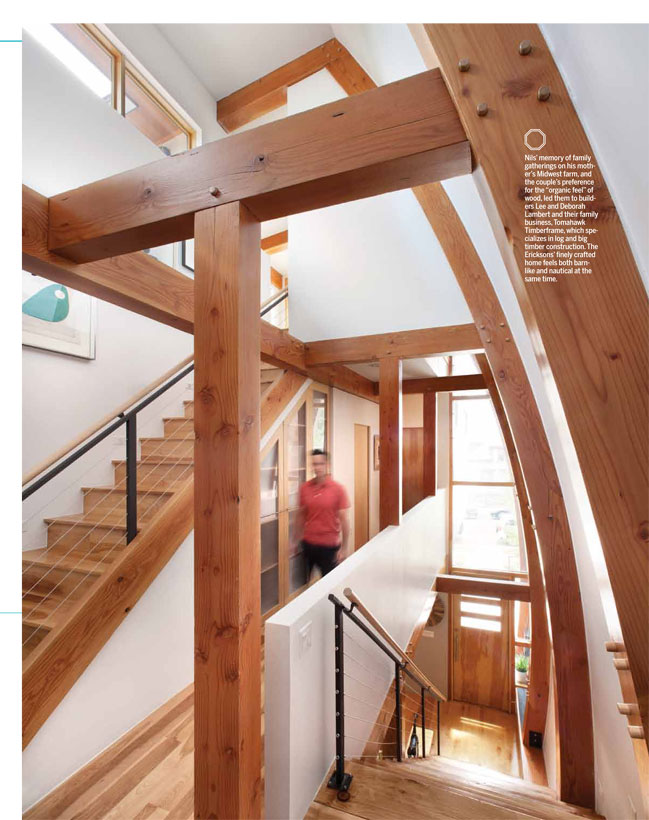 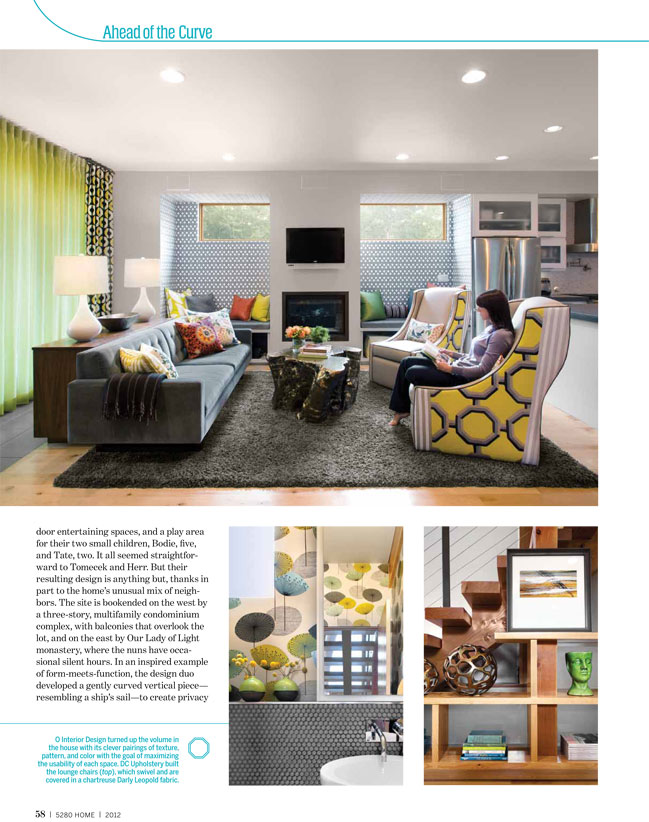 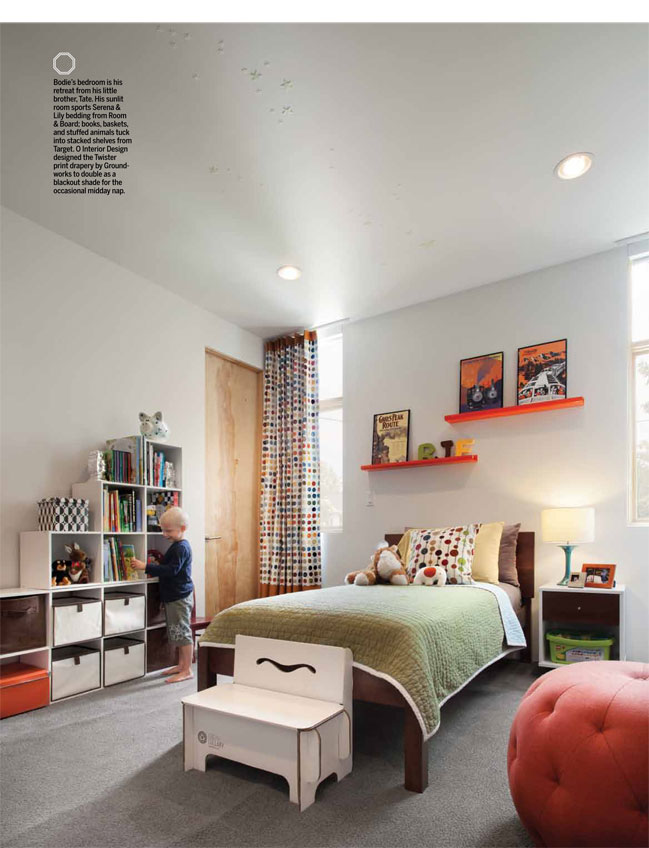 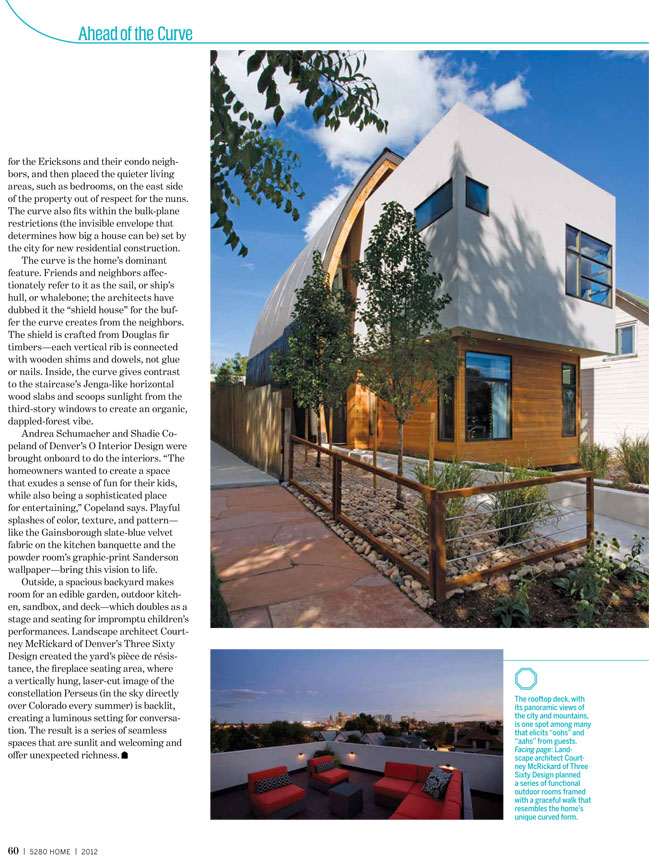 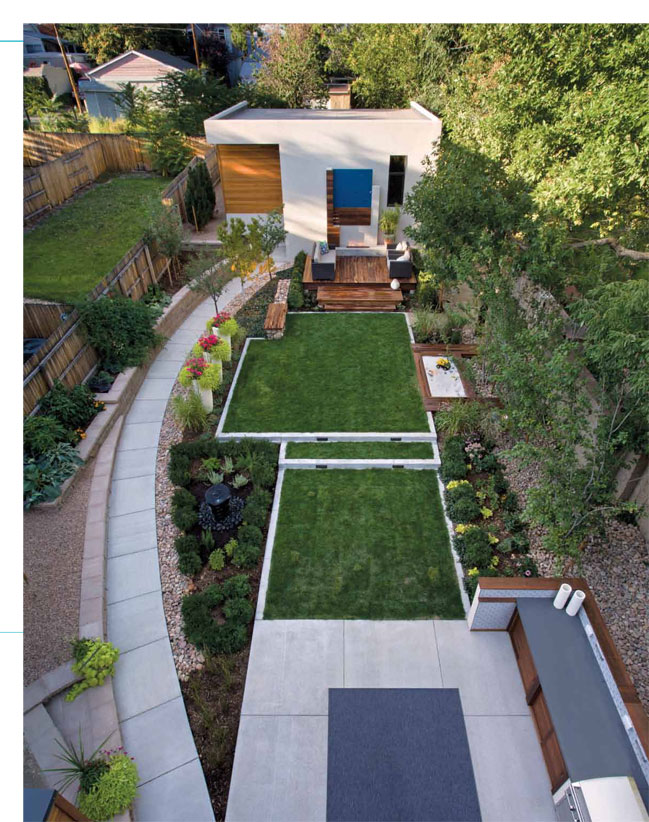