There are few things that make me happier than news of a pending bakery. This is especially true when it’s a place like Glaze: The Baum Cake Shoppe, a high-end spot with a tight focus. In this case, the Congress Park shop will make and sell baumkuchen.

The origin of this treat, which is baked on a skewer rotisserie-style and famed for its 18 to 20 tree-like rings, is a little fuzzy. There’s some determination that the cakes’ roots extend all the way back to the Greeks. But it was very much a German tradition until after World War I, when a German prisoner of war (and a baker skilled in baumkuchen) introduced the dessert to the Japanese. The rest, as they say, is history.

As for how this “tree cake” has arrived in Denver, well, that’s been a two year journey for Heather Alcott. The market researcher and former Congress Park resident spent years living in China and Singapore and traveling to and from Japan. One of those trips took her to the city of Kobe, where she first tried baum cake. That evening, she began researching the dessert and, ultimately, how to bring it to Denver. 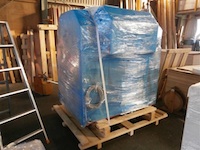 The oven—nicknamed Red Dragon—is the first and only in the U.S.; it’s expected to arrive in Denver on October 17. Alcott laughs when she talks about how pampered this piece of machinery is: The oven (pictured) has its own cabin on the ship, it’ll be craned into the bakery later this month, and ultimately, an employee of the company that built it is flying from Japan to turn it on for the first time. Only those certified to work on the oven will be allowed to bake the baumkuchen.

The process is part of the magic, Alcott says, and the oven and kitchen will be encased in glass so customers can watch the cakes come together. The treats, which in Japan are a symbol of life and longevity and are often given as wedding gifts, are made from the purest of ingredients: farm-fresh eggs, almond flour, Callebaut chocolate, and—occasionally—matcha tea.

Alcott hopes to open Glaze by Thanksgiving, but she concedes that it’ll take time to hone the oven and figure out the nuances of baking baumkuchen at altitude. When she does open, it’ll be worth stopping by for a baum cake, a cup of Illy coffee, and the show. She has also been tapped by Sushi Sasa, and possibly Sushi Den, to supply the restaurants with the specialty desserts.

More Neighborhood News: Just up the street from Glaze, Madison Street Grill is morphing into TAG Burger. The newly concepted eatery will open Tuesday, October 16. Look for creative burgers (I’ve got my eye on the Colorado Proud with roasted green chile, goat cheese, and local wildflower honey) and craft beer.