Four years ago, Nicole Davis was diagnosed with an aggressive form of breast cancer at 25—while pregnant with her first child. Just months shy of her daughter’s second birthday, she found out the cancer had spread to her liver. Now, after 18 months of treatment with an experimental drug that’s part of a clinical trial, she’s celebrating more than a year of cancer-free scans.

“Today was the day I was originally diagnosed with cancer while my sweet angel Abigail was still growing in my belly. That was the worst moment of my life. I will never ever forget that moment because from then on because God would challenge me in ways I never knew were possible. Although some of them have been very difficult, I continue to come out on top. It is all because of the amazing family, friends, doctors, and sense of community I am surrounded by every day. I could have never done any of it without all of you. I am truly blessed and although I would never ever call my cancer a gift…because I would never give it to any of you….I do know in my heart that it is such a blessing because I have the opportunity to look at life everyday with such a beautiful perspective and have learned to appreciate everything in ways that a person cannot begin to imagine unless you are told, ‘You’re going to die.’”

Here, Nicole talks to 5280 about living with Stage Four cancer at 29, maintaining a positive outlook, and appreciating the little things. 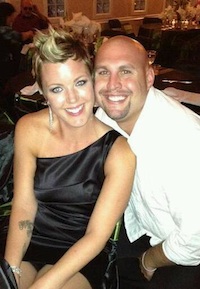 5280: The last time our readers heard from you, you’d just started a clinical trial at University of Colorado Hospital. Walk us through what’s happened since.

Nicole Davis: I was put on two types of chemo, the experimental drug, which is called TDM1, and Taxol, which I’d been on before. TDM1 is on the verge of getting approved. Losing my hair this time was really traumatic. Before, it came out in huge clumps, but this took like two months of shedding before I finally had to shave it. In November 2011 we had a shaving party, and Abbey, who’s now 3, was there because I was worried it would be scary for her and I thought it would help to explain it and have her be part of it. We had her take turns shaving it. We explained I was sick and was taking medicine to make me better but the medicines make my hair come out.

That night, she had a nightmare. I came in and she couldn’t even look at me. She was scared of me and shaking. I went running into our room bawling and got Tyler. It affected her in a way I wasn’t prepared for. I started reading the book, You Are The Best Medicine to her every day, we kept talking to her about it, and then she started kissing my head and getting excited about my hair coming back. She’d kiss my head and say, “Mommy, You’re gonna get better!”

I did Taxol weekly, and every third week I got the experimental drug. At first, the TBM1 gave me a really bad reaction, a seizure. They had to rush me out of infusion room and put things in my IV to suppress the reaction. I had to be on lots of steroids, which made me puffy, and then they started doing bone infusions to keep my bones strong and keep them from weakening from the cancer and the chemo. From October through March [2011 to 2012] I was really sick. The bone infusions each month would, literally, put me in bed for a week. Plus, I was on every pain medicine you can imagine—I couldn’t even tell you what time of day it was. That was really the first time in these four years that I really looked and felt sick, because even when I was pregnant with Abbey, my face looked the same, I was just bald. At this point during the trial though, I couldn’t even walk.

But, it was working! When I started the trial, the cancer was all over my liver, and within a month it was gone and there haven’t been signs of it since. For a year, I got scans every few weeks, and now I get them every few months.

I dropped the Taxol and am continuing to do the TBM1 every third week. After the yearlong trial was done, I rolled over into the extension, and once it’s approved, I’ll keep taking it as a normal drug. The plan is to be on it indefinitely. When you’re Stage Four, you’re technically not curable. Once it has spread beyond the original site, it’s not containable. So I’m still Stage Four, still have the terminal diagnosis, but thankfully it’s not doing anything. It’s just kind of laying dormant. For someone who’s Stage Four, that’s your best possible outcome until they find a cure.

5280: When did you start feeling better?

ND: By June 2012, I was able to get off most of the steroids and I started feeling a lot better. I lost a lot of the extra weight I’d put on. Now, what I face is fatigue. It’s like I have an 80-year-old body as a 29-year-old. My taste buds have changed, too, so it’s hard to find stuff that I like to eat. My blood can’t clot, and I essentially have no immune system. If Tyler or Abbey get sick, they have to stay away from me. I have lots of bone pain, and pain around my surgery sites. But overall, I’m trying to find my new normal because this is the person I’m going to be. This is the life I’m going to have. It’s hard because I was an athlete, I liked to work out. But I just got a gym membership, and am in the process of figuring out what I can do. My doctor said to do yoga so I’m looking at some of those classes.

What I’m struggling with now is my mind can hold up as long as it needs to, but what if my body can’t? What happens when my heart can’t take [the chemo] anymore? My heart capacity is apparently 60 percent of what it should be or what’s normal. I look normal. I have hair. No one would ever know. But when I walk down the street, I get so tired. If I get to the point when my body can’t take more chemo, then what do I do? It’s terrifying. I try to eat well, be as healthy as possible, but at the end of the day I get toxins put in me every three weeks.

5280: Heading into the trial, you’d already been through such a roller coaster. Were you scared to be hopeful? What was your mindset like?

ND: I’ve never not been hopeful. I’ve never believed in my heart that this was going to be the thing that takes me out. Sure, I’ve had some moments, like when it came back, that I thought maybe this is it. But the only thing I have control over is how I think about this and feel. So if I start getting negative, I change my thought process really quickly.

ND: When I made it to the year point of not having any signs of cancer. I was able to step back and take a breath and say, “OK, it’s been a year.” The first three months without a scan were nerve-wracking because during the first year of the trial I was getting scans every few weeks, but by the last scan I had this month, which was clear, I’d almost forgotten about my appointment.

ND: This January was the anniversary of my original diagnosis and my lumpectomy, and February is the anniversary of when we found out it had spread to my liver. So January/February has always been really hard for us. We didn’t celebrate or anything this year, but we’re planning a trip for our five-year wedding anniversary in July, my 30th birthday in December, and then January will be my five-year cancer anniversary, and next April Abbey will be five. These are all dates I was told I wouldn’t make it to. So we’re planning a trip somewhere between this summer and Abbey’s fifth birthday to celebrate all together as a family.

5280: You’ve mentioned that cancer gave you a new perspective on life, a new way to appreciate it each day. Tell us more about that.

ND: When people hear how young I am and that I have this terminal diagnosis, they freak out. I’m kind of the person they don’t want to be. Last year, I went to this big conference and people were really inspired by my story, but then they found out I’m Stage Four and it was like I was the black sheep. You have this huge black cloud over you, but with the way I’ve chosen to deal with it and how my family has chosen to deal with it, we’ve never looked at it as a negative thing.

Life deals you these cards. Sometimes you get a good hand, sometimes you don’t. Unfortunately, we’ve been dealt a horrible hand. You can either fold and not try to win, or you play them and see what you can do with them. I look at it like we’ve got crappy cards, but we’ve been able to do amazing things with them.

5280: Some people might hear that and think, OK, but what’s the silver lining of Stage Four cancer?

ND: The silver lining for me is that I get the opportunity to look at the tiny things that could matter the least to someone, and have such an appreciation and joy for those things. The fact that my daughter gets to grow up in that is really important. It’s like an echo effect. She’ll be able to carry on that empathy, compassion, and joy that not a lot of people get to grow up around.

Cancer doesn’t have to be a death sentence. It seems to me that the diseases that we used to hear about it so much—like TB, AIDS—you heard about them so much right when they were on the verge of coming up with the cures, or the best treatments, or vaccinations for them. In my lifetime, I think I’ll be able to be one of the people who sees a cure. As cliché as that sounds, I just think there’s so many people getting cancer and so much money and research being put into it as a result, I just think a cure is inevitable.

Bonus: To read more about Nicole’s journey, read her first-person accounts of being a mom, going through treatment, and finding motivation.