Not quite four miles south of downtown lies the charm-filled hamlet of Platt Park. Residents can easily bike, cab, or take the light rail (there’s a station at Louisiana Avenue and Pearl Street) into the city proper, but visit on a sunny summer weekend, and you’ll find yourself wondering why anyone would ever want to. Boasting Old South Pearl Street, a shopping and dining district full of unique boutiques and top-of-the-city eats, a border on Antique Row on South Broadway, and plenty of professional services, the area has just about everything an urban dweller could desire (walk score: 85), with the advantage of quieter streets with sizeable backyards. Mostly single-family homes dot treelined streets—primarily older homes that have been updated and/or added onto, although some newer, modern architecture can be found. While grand dame Washington Park is conveniently situated less than a mile away, the almost-four-acre James H. Platt Park is a gem in itself, with a well-kept playground that the many children in the neighborhood’s 3,000 households enjoy year-round.

BY THE NUMBERS (Figures are for the first quarter of 2013, from Fuller/Sotheby’s Micromarket Reports; Broadway to Downing, Louisiana to Evans)

Shopping: Meander through the smattering of antique shops on South Broadway for one-of-a-kind finds. Try 2012 Top of the Town winner Watson & Co. for funky reclaimed tin letters and an impressive selection of light fixtures. On Old South Pearl, the Sand Dollar Gallery has covet-worthy watercolors and smaller gift items like pottery and jewelry. Hit up Dinea Boutique & Design for high-end designer duds. A Whole Foods across I-25 serves the north end of the neighborhood, and there’s a Safeway just past the southern border at Evans and South Downing.

Services: The Ruffly Rose is a quirky full-service florist located, like many of Old South Pearl’s businesses and restaurants, in a converted Victorian (although Ruffly’s brightly painted pink and green facade stands out). Platt Park residents have access to more than their share of holistic health services, and young professionals and moms stay toned at Mudra Yoga Studio and Pilates on Pearl.

Dining: Where to begin? The storied and much-lauded Sushi Den and sister restaurant Izakaya Den call Platt Park home, luring in diners from across the Front Range and beyond. The Village Cork is a quintessential neighborhood gathering spot and to share a bottle of wine and small plates with a date or dear friends. Salumeria Cinque Soldi, Top of the Town for best deli in 2012, is arguably the closest thing to a true East Coast–style deli in the Mile High. Stella’s Coffeehaus is a favorite destination for laptop schleppers from all parts of town. And that’s just Old South Pearl. Over on South Broadway, try Black Crown‘s Sunday Champagne piano brunch (11 a.m.–2 p.m.) for a refreshing changeup from the usual mimosa-chugging crowd.

Culture: A handful of galleries dot the area, including Susan Bell Fine Art, which features lovely Western oil paintings (like this one of the Stock Show parade). Check out the First Friday Art Walks on Old South Pearl from April to December. 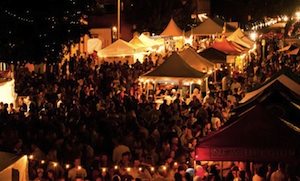 Diversions: Old South Pearl Street knows how to throw a block party—and they do, multiple times throughout the year. In the summer, two Rock the Block events—BrewGrass (June 8) and Blues & Brews (August 10) feature seven bands each, including, this year, Mountain Standard Time at the former. Their Paddy’s On Pearl and Winterfest events round out the seasons. And, every Sunday (May 19 to November 23), from 9 a.m. to 1 p.m., you can wander a lively farmers’ market, with a special flea market the last Sunday of each month.

Insider Tip: The historic James Fleming House—which served as the home of the mayor of South Denver and its jail when Platt Park separated itself from Denver for eight years in the late 1800s—has been recently restored by the Park People. It now houses several nonprofits and is available to rent for private events from Denver Parks and Recreation.