If summer makes you dream of Red Rocks concerts, you would be: 1. absolutely correct (the concert series is spectacular), and 2. missing out. Red Rocks is about so much more than awesome acoustics. Check out our daylong guide to the park and Morrison.

Yes, it is worth setting your alarm. Don’t ask questions; just do it. 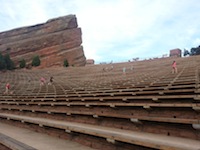 Climbing the 69 rows of seating, not to mention the stairs that take you there, make me feel like a true training champion. Go early to beat the crowds; by 9 a.m., the amphitheater is often crowded. Run, walk, do lunges, and reward yourself with the vistas at the top.

For a quick jaunt, take the Trading Post Trail, which is 1.4-mile trek through and around Red Rocks’ formations. You’ll start out at the Trading Post just down the hill from the amphitheater. It’ll make a wide loop—with views of the Rocks—and lead you to a meadow. If you’re feeling ambitious, head out on the Red Rocks Trail. It splits into two sections. One way will take you on the Matthews-Winters trail, which creates a six-mile loop. The other segment will connect you to the Dakota Ridge Trail.

To get the full Red Rocks experience, take the guided tour. It’s offered daily at 10 a.m. from June 1 to October 1. You’ll start in the Visitor Center and learn the park’s history, watch a documentary, check out concert footage, become geologically informed, and see the Performers Hall of Fame, which includes mementos from some of Red Rock’s top performers (think: Santana and the Police). 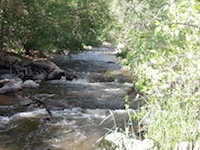 This small town boasts several shops, including the Morrison Country Store and La Boutique des Boudreaux. My favorite diversion, though, is a trail that winds through the town and follows Bear Creek.

Mexican food is a Colorado staple, and Morrison Inn doesn’t disappoint. If the weather cooperates, be sure to sit on the upstairs patio. Order a margarita (preferably the Red Rocks Margarita).

The original Jefferson County paleontology museum offers real fossils dug up from Morrison and nearby areas. After touring the Jurassic, Crustaceous, and Ice Ages, you’ll end in the paleontology lab where the museum is continuously doing research on fossils.

Watching modern-classics like Mean Girls with other cult-classic-obsessed fans outweighs watching it at home. (Check out the calendar for more information.)